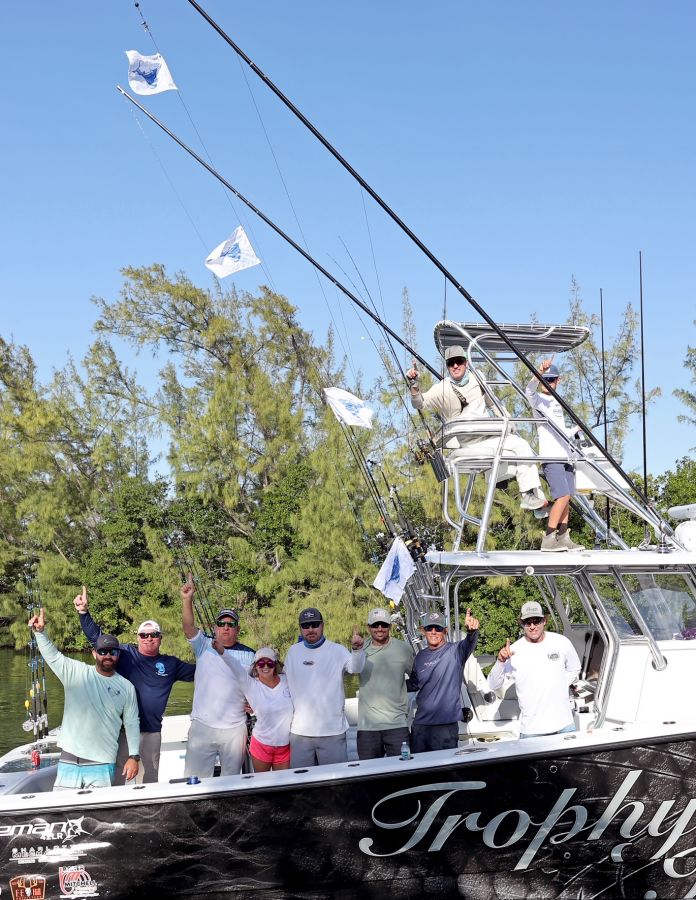 The 59th Annual Islamorada Sailfish Tournament kicked off at Whale Harbor hosting 88 anglers, plus friends and family with a grand buffet. Under rough conditions and tough fishing anglers competed for three days until lines out of the water was called at 3PM on Sunday December 4th.  Captain Brian Cone led anglers Mark Mitchell and Kenneth Padgett of Charlotte, NC along with Travis Bennett, Brett Shahlamian and junior angler Andy Cone all from Tavernier, FL to victory with a total of 4 releases on time. The team took home beautiful sailfish Gyotaku prints by Lisa Lee’s Gallery of the Arts sponsored by Caribee Boat Sales and Yamaha Outboards along with Smith sunglasses and Papa’s Pilar rum and a fat check.  42 Sailfish were released out of the 54 called in hook ups with nearly $80,000.00 awarded to the winners.

Anglers were greeted with wind and salt spray as the morning bite began.  By 12:15 the Tackle Center’s angler Donny Lange of Tavernier, FL had three fish and the team was in the lead.  As the day progressed Hillbilly Deluxe would be hot on their heels with three releases of their own.  Trophy Hunter would have a release by junior angler Andy Cone and one for boat owner Mark Mitchell.

Day two would start out early for Remix as Captain JC Cleare called in a hook up only three minutes after lines in. The fish was released just two minutes later, giving the Remix a total of two fish for the two days.  But the day would belong to the Dirty Boat and captain Kit Carson’s team.  They released three sails landing them in third place at the end of the second day.  Trophy Hunter angler Mark Mitchell would release the last fish of the day at 3:48 moving them into 4th place with a two day total of three releases.

On the final day of fishing the weather got better and so did the fishing.  Captain Justin Baker called in the first fish of the day for angler Blake Johnston aboard the Pressure Drop placing them 5th on the list of boats with three fish.  Que Mas’ angler Gary Benney would release his first ever sailfish adding the Que Mas to the list of boats with three releases.  At 8:38 Trophy Hunter called in a hook up.  It would be mates Sean O’Donnell and Justin Matson working as a team to make sure angler Kenneth Padgett would get the fish.  At 8:56 the fish was released and Trophy Hunter now had the lead with 4 fish. As others would join the list of three releases it would be angler Jess Jorgensen of Tavernier, FL aboard the Hillbilly Deluxe that would release their teams 4th fish at 12:00. The Hillbilly Deluxe captained by Trevor Frins with anglers Gus Solis, Chris Trentine, Tyler Webb, Cody Gunther and Hank Pinder all from Tavernier, FL along with Parker Cox of Key Largo, FL and Marc Toledo from Hollywood, FL would take home 2nd place Gyotaku awards sponsored by Tackle Center of Islamorada along with a check and other goodies.  Remix would add two more to their total by 12:17 giving them 4 fish.  Anglers Bill Danko from Cincinnati, OH along with Jorge Corzo and Ryan Alexander from Miami, FL and Rick Arnold of Islamorada, FL won 3rd place money and Gyotaku prints sponsored by Island Arms and Indoor Range Tackle Center angler Donny Lange won Top Male Angler and the Bill Hirni Memorial High Point Angler award with his three releases.  Top Lady Angler was Nicole Paul-Hus from Pompano Beach, FL with 1 release on time aboard the Skip Jac.  Andy Cone’s release on day one would make him the top Junior Angler.  Most tagged fish team awards went to anglers Chris Chastain from Noblesville, IN Sam Chastain of Morrisville, IN along with Alan Sutkowski from Plainfield IN and Colby Mason of Islamorada, FL with 2 tagged fish aboard Captain Alex Adler’s Kalex. Alan Sutkowski was also awarded the most outstanding catch for a 31 pound African Pompano. Joe Peros of Pompano Beach, FL won the Largest Tuna award with a 15 pounder aboard the Skip Jac.  Leg A Sea angler Matt Konopauki of Tavernier FL landed the largest Dolphin a 13.6 pounder.  The Largest Mackeral award went to Ian Klein of Pompano, FL with a 24.2 pound fish aboard the Goombay Smash.